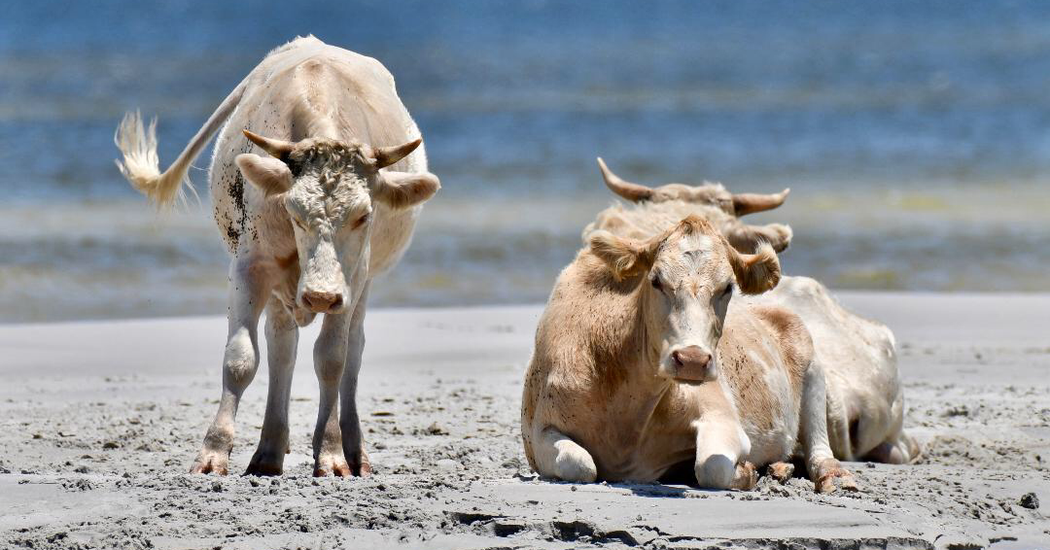 Hurricane Dorian slammed into North Carolina as a Category 1 storm on Sept. 6, lashing the state with heavy rain, wind and flooding after it made landfall on the Outer Banks, a chain of narrow barrier islands off the main coast.

Rising floodwaters swept over the land, and a storm surge carried a group of horses and cows out to sea. To the surprise of residents and national park officials, three of those cows were recently discovered at the Cape Lookout National Seashore park on the Outer Banks.

The cattle are believed to have arrived at the federal park by swimming at least two miles across the Core Sound from Cedar Island, according to a park spokesman, B.G. Horvat. He said that the cows’ caretaker, Woody Hancock, had identified them as being from Cedar Island.

“It’s a tremendous story of how they made it,” Mr. Horvat said on Wednesday from the park, which has 56 miles of beaches and is known for its black-and-white-checkered lighthouse, surf fishing and wild horses. “If the cows could talk, imagine the story they can tell you of enduring that rush of water,” he added. “That must be incredible.”

The cows were part of a group of domesticated livestock that grazes on about 1,000 acres of privately owned land on Cedar Island, where they are cared for by Mr. Hancock and others, according to The Charlotte Observer, which reported on the re-emergence of the three cows.

Mr. Horvat said that cows and horses on the island were swept away by a surge of water of about nine feet or so.

Mr. Horvat said that park employees found the first cow on Sept. 7, a day after the hurricane. Two more cows, both yearlings, were found three weeks later. The cows appear to have a bond, he said.

“Ever since they found each other, they have been hanging out together,” he said. “They are just grazing on the North Core Island.”

Mr. Horvat said that park officials were hoping to find the owner of the cows. Once contacted, the owner will have 30 days to come up with a plan to relocate the cows.

He said that possible scenarios for removing the livestock from the park might include sedating them to ferry them back to Cedar Island, or transporting them with a trailer.

“If the park needs to help round up the cows, we will help them do that,” Mr. Horvat said.

Nena Hancock, who owns and manages a herd of horses on Cedar Island with her husband, Woody, lost 28 horses to the storm. She said they would help relocate the cows back to their home.

“We will be more than glad,” she said in an interview on Wednesday. “We would be willing to help when that decision is made.”