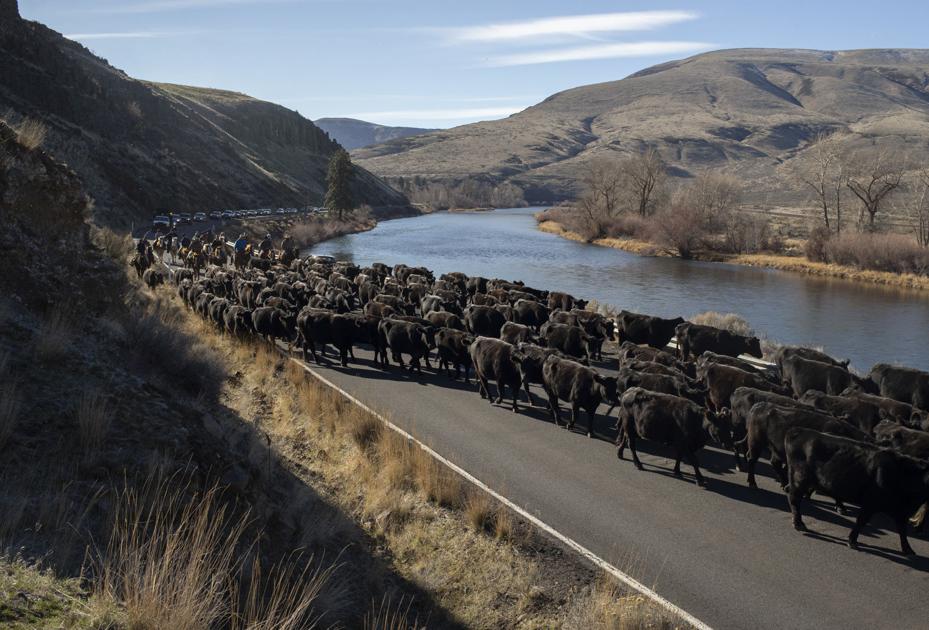 ELLENSBURG — More than 225 cows sauntering down the road created a welcome spectacle in the Yakima River Canyon on Saturday.

Longtime rancher Don Akehurst — still riding his horse at 89 years old — said he’d never seen so many people come out during his 10 or 15 years participating in the annual Eaton family cattle drive, including two years coordinating the effort. Cars lined the canyon road and packed the parking lots near Big Pines Campground as people waited for a glimpse of the unique trek to the Eaton ranch.

Some, like Dianne LaBissoniere, attend every year to take advantage of an ideal opportunity for amateur photographers. Others merely stumbled into the experience while trying to take the scenic drive through the canyon.

“We were gonna go surprise Mom at work at Costco,” said Brian Robinson, who was with his two children, 5-year-old Apollo and 7-year-old Iris. “It’s cool for them because they get to see it. I don’t think they’ve ever seen anything like that before.”

Akehurst and LaBissoniere agreed that so many events getting canceled over the last 11 months likely brought out more people than usual. Near-perfect weather with temperatures in the 50s only added to the cattle drive’s appeal.

David and Dianne Stoothoff drove up from Yakima and waited for more than an hour to see the cows turn onto the canyon road off of Burbank Creek Road  around 10:15 a.m.

Perhaps the best view belonged to Marty Stingley, who rode in a pickup slightly ahead of the cattle and the lead horseback riders, including her grandsons Jace and Ryker Stingley.

“In our minds it’s still the Eaton cattle drive and it’s honoring their legacy,” said Stingley, whose family has largely taken over the drive and supplied most of the cows headed to Eaton Ranch in recent years. “To just keep the ranching industry alive, as it were, in any way, is an honor.”

Adyson Eaton, 12, carried on her family’s tradition by participating in the cattle drive for the first time atop her pony, Prince. She took on responsibilities such as blocking off driveways to ensure the cows, many of whom are bearing calves, stayed on the right course.

But the toughest work came the day before, when Debby Jackson and a small group of riders spent about four hours rounding up the cattle in preparation for their 6-mile journey. She’s helped the Eatons move cows to pastures where they can be more closely observed while calving every winter for the last 15 years.

Jackson and others don’t always love seeing spectators, since they sometimes get in the way and make the job more difficult. Beneitta Eaton recalled seeing a large crowd during their very first drive, and she and her husband still marvel at how their conventional way of moving cattle has attracted attention throughout the West.

“It’s an experience that not many people have to be that in tune with nature and everything,” said Beneitta, who met the group at Big Pines while the cows took a break near the river. “You wouldn’t want to take that away from memories that people have.”