Billings, Mont., March 25, 2020 (GLOBE NEWSWIRE) — Billings, Mont. – In the wake of empty beef cases in grocery stores in some areas of the country, R-CALF USA has launched a new Website that connects consumers with their neighboring cattle farmers and ranchers who raise and sell cattle or beef that is exclusively born, raised, and harvested in the U.S. directly to consumers. The Website is www.USABeef.org. The Website is a platform for cattle farmers and ranchers to list their farms, ranches, or businesses, along with the type of cattle, beef and beef products they offer direct to consumers. American consumers can peruse this list online and contact the farmer, rancher or business of their choice to purchase beef that is exclusively born, raised and harvested in the United States. In some instances, the farmer, rancher, or business will sell consumers a portion or the entire live animal and will arrange for the consumer to have the animal harvested at a state-inspected packing plant. In other instances, the farmer, rancher, or business will sell beef and beef products directly to consumers that were harvested in a federally inspected packing plant. R-CALF USA issued a member alert to its 5,300 members in 43 states on Friday announcing the availability of the platform that its cattle farmer- and rancher-members can begin listing their farms, ranches and businesses so they can be contacted by American consumers. The site is growing daily, currently 76 farms, ranches and businesses from 24 states are already listed on the platform and American consumers can begin contacting them immediately. All U.S. cattle farmers, ranchers, and business that sell beef direct to the consumer, including local butcher shops and local processors, are invited to list their contact information at no cost on www.USAbeef.org, provided they meet the site’s only requirement: all beef must be USA -born, -raised, and -harvested. “This is a small but important step that our organization can take to help connect America’s consumers to America’s cattle farmers and ranchers so they can enjoy the safest, most wholesome beef in the world – USA beef,” said R-CALF USA marketing director Candace Bullard. Bullard added that her organization hopes that by bridging the gap between consumers and their cattle-producing neighbors, some of the farmers and ranchers struggling with seriously depressed cattle prices will be able to stay in business. “However, many of our industry’s cattle producers are not able to sell their cattle or beef directly to the consumer, which is why our first step in addressing this ongoing crisis was to urge President Trump to take immediate steps to fix our dysfunctional cattle market and to pass a new Mandatory Country-of-Origin Labeling (M-COOL) law for beef so American producers can compete against imports in America’s marketplace,” she said. “Back to our new Website, if people share the Website on their social media, and message it to their friends perhaps we can help ensure that no American family will have to go without USA beef on their table at a time when it’s needed most,” Bullard concluded. # # # R-CALF USA (Ranchers-Cattlemen Action Legal Fund, United Stockgrowers of America) is the largest producer-only lobbying and trade association representing U.S. cattle producers. It is a national, nonprofit organization dedicated to ensuring the continued profitability and viability of the U.S. cattle industry. Visit www.r-calfusa.com or, call 406-252-2516 for more information.

Did we find a bottom for cattle?  AgWeb

GARDEN CITY, Kansas — Before June 2018, finding cattle that were potentially exposed to diseases was time-consuming and complicated, requiring a patchwork of information from auction houses, feedlots, producers and meatpacking plants.

That’s when Kansas spearheaded U.S. CattleTrace, filling a void when it comes to tracing deadly diseases in live cattle and possibly opening up new global markets for beef. Nine other states have signed onto the pilot program, which has distributed 65,000 ultra high-frequency tags that are scanned just like your online purchases.

But there’s a catch — CattleTrace is voluntary. Some ranchers say the program is just not worth their time or the possible invasion of privacy. And with more than 12 million cattle in feedlots across the U.S., one of the program’s officials even acknowledges that if a major “tragedy” strikes, it might not be effective because the program isn’t mandatory.

Cassie Kniebel, the program manager for U.S. CattleTrace, said it’s “something that we hope works for the industry and in the industry because it’s producer-driven,” she said. “So it’s not a government program.”

CattleTrace did start out with some government money, $500,000 in federal funds, and the same from the state of Kansas and private funding. It now exists as a nonprofit that wants to be the national disease traceability system, but it doesn’t expect to be implemented 100%.

Kansas is one of the leading states for meatpacking and feedlots, so a lot of cattle from other states come here.

“We’re at a huge risk if there’s a disease outbreak because we have a lot of cattle moving into the state,” Kniebel said.

Kansas also is soon to be the home to the nation’s top animal disease research facility, which will be located in Manhattan and is replacing Plum Island in New York.

How the program works

The U.S. Department of Agriculture requires that animals traveling between states have an identification tag and a veterinarian certificate, but the rule exempts animals under 18 months. Plus, cattle tags vary: low frequency, high frequency, metal clips, ear or back tags. CattleTrace wants to use one type of tag — ultra high frequency tag — to streamline data collection.

“Think of it like when you have a chip for the toll booth going on the interstate and these are high frequency identification tags,” CattleTrace board member Mark Gardiner said. “… they can be scanned at the speed of commerce.”

So far, the CattleTrace database has captured 300,000 scans from ultra high frequency tags at auction markets, feedlots or meatpacking plants. It keeps tabs on an animal’s tag number, the date and time the tag was read, and the GPS coordinates of the animal. Once a cow is slaughtered, its tag is retired.

Nine other states are involved with CattleTrace — Texas, Oklahoma, Nebraska, Missouri, Kentucky, Virginia, Florida, Washington and Oregon — though Kansas has the most tagged animals.

Only state animal health officials may make requests for information from the database, which is exempt from the Freedom of Information Act. Kniebel said the design is intentional.

“The information is controlled kind of by the board of directors, so that access, that data privacy, is top of mind for producers,” Kniebel said.

“Even if there isn’t a disease outbreak, who gets to count the numbers of cattle? Who gets to keep that data secure?” Fox said. “Other unscrupulous people might hack into the system and use those numbers of cattle against us for marketing purposes or, you know, many other things.”

CattleTrace is most worried about a few highly contagious diseases: brucellosis, tuberculosis, bovine spongiform encephalopathy (aka BSE or Mad Cow Disease), rabies, and foot and mouth disease. The latter hasn’t been seen in the U.S. since 1929, but if it happened today, it would shut down the cattle industry.

“When it’s something like hoof and mouth, everything will stop movement — in fact they call it a stop-movement order and no cattle can move,” said Ron Gill, an extension livestock specialist and associate department head of Texas A&M University’s animal science department.

“And if they’re on the highway, they’ll actually pull them to the side and make them stop and unload them somewhere,” he added. “So yeah, it’ll be ugly when that happens.”

Any of those diseases could prompt a disease trace request from CattleTrace, according to Justin Smith, Kansas’ Animal Health Commissioner at the state Department of Agriculture. He offered an example of what kind of drastic measures would need to be taken if there was an outbreak of foot and mouth disease.

“If we find that there’s a herd that we can point back to … and they are infected herd … more than likely we will have to indemnify and euthanize and dispose of those animals in a humane way,” he said. “So they would be destroyed.”

If experts suspected a disease outbreak was afoot, Smith said he’d request information from CattleTrace, and the board of directors would have to approve his request. After that, he’d review data from every facility the animal was scanned at, and call those places to find out when the animal arrived and who brought the animal in.

This makes it easy to eliminate someone’s cattle from a disease investigation, he said.

“Quite frankly, we in the United States have not done a good enough job of doing this,” he said.

But he’s hopeful that there are enough incentives for cattle producers to join — new markets.

“I can send my cattle and sell my cattle to the European Union or to China to markets that I can’t have if I don’t have this documentation,” Gardiner said.

Plus, Gill said, CattleTrace weeds out sick cattle, which may help keep grocery stores stocked with beef — regardless of how prices may fluctuate during a disease outbreak.

“That is the entire premise behind it is to try to show that we can show where did these (cattle) come from (and) get the rest of the cattle back in the market quicker,” Gill said.

But Fox is still skeptical, calling the ear tags “an extra expense.” He’d rather see more federal money being spent on zoonotic disease prevention at the country’s international borders and ports.

“We do not bring cattle or pigs in from countries that have foot and mouth disease,” Fox said. “We require that the meat be cooked at a certain temperature that prevents the disease from coming in here.”

Gardiner understands the arguments for and against a disease tracing system. He also knows that because participation isn’t mandatory, things might not go smoothly: “It wouldn’t work in the event of a tragedy as far as we might not be able to trace back where that animal came from.”

CattleTrace wants to incorporate 68% of U.S. cattle into its database, a far cry from the 0.1% it has. The nonprofit’s funding runs out in June. Kniebel said it plans to continue and has support from the cattle industry, but if funding doesn’t come through, the nonprofit would dissolve.

“It would be difficult to start again at ground zero and take another few years potentially to get something else going — at least an industry-driven initiative,” she said.

Corinne Boyer covers western Kansas for High Plains Public Radio and the Kansas News Service. You can follow her on Twitter @Corinne_Boyer or email cboyer (at) hppr (dot) org.

The Kansas News Service is a collaboration of KCUR, Kansas Public Radio, KMUW and High Plains Public Radio focused on health, the social determinants of health and their connection to public policy.

Kansas News Service stories and photos may be republished by news media at no cost with proper attribution and a link to ksnewsservice.org

“And the reality is we’ve worked on prevention and treatment measures for many, many years and they haven’t really helped all that much and so I think moving forward, I think the cow/calf deal in Minnesota is really going to have to focus and restructure how we calve out cows in Minnesota,” said Eric Mousel, University of Minnesota Extension beef educator. 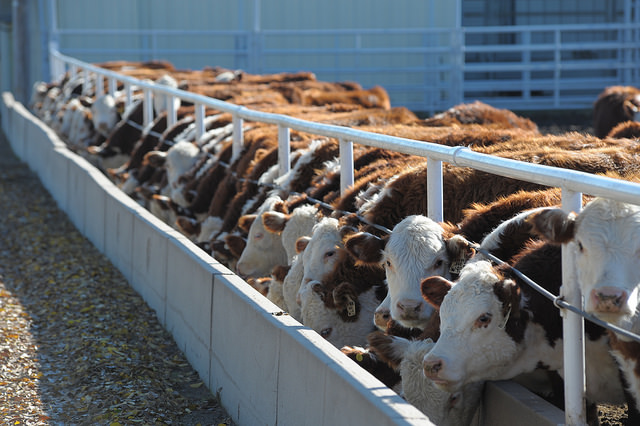 Cattle and calves on feed for the slaughter market in the United States for feedlots with capacity of 1,000 or more head totaled 12.0 million head on Jan. 1, 2020. The inventory was 2% above Jan. 1, 2019, USDA NASS reported on Friday.

The inventory included 7.37 million steers and steer calves, up 1% from the previous year. This group accounted for 62% of the total inventory. Heifers and heifer calves accounted for 4.59 million head, up 4% from 2019.

Marketings of fed cattle during December totaled 1.83 million head, 5% above 2018.