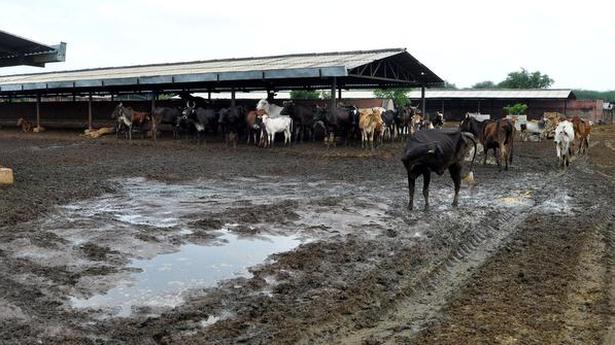 Old, non-lactating cows housed in traditional cow shelters tend to have higher stress when there is cow dung in the shed, especially in places where the cows lie down, when the ambient temperature is higher than 25°C and when cows do not have access to open yards. In addition, old age, dehydration, hair loss in the abdomen area, swellings and injuries of the limbs and body too lead to stress in cows, researchers from the University of Queensland and the Hyderabad-based Centre for Cellular and Molecular Biology (CSIR-CCMB) found.

“[Cow] dung in the lying areas makes the cows dirtier and susceptible to diseases and infection, leading to stress. Shelters providing access to yards and having clean lying areas had cows with lower hair cortisol levels,” says a paper published in the journal Animals by researchers from the University of Queensland and Dr. Govindhaswamy Umapathy’s team from the Laboratory for the Conservation of Endangered Species at CCMB.

Cow dung making cows susceptible to diseases and infection, leading to higher stress goes against the perception by a section of the society that cow dung has antimicrobial properties.

Dirtiness of the cows, especially in certain parts of the body such as flanks, udder and/or hind limbs had significant relationship with carpal joint injuries, lameness, nasal discharge, diarrhoea, and lesions on the body, says the paper.

While cortisol level in faecal, urine and blood samples can only reveal short-term stress of a day or two, measuring the concentration of stress hormone in the hair can reveal the stress experienced by cows during the last three-four months. The oily secretion (sebum) that lubricates the hair tends to bind and aggregate the circulating cortisol in the shaft thus making it possible to study long-term stress.

The study analysed the welfare issues in the cow shelters just once. Studying the cows from the time they enter the shelter could provide more information on stress responses, the paper says.

“It is not known whether cortisol concentration in hair is linearly related to the welfare of the cattle,” the paper says.

Samples from 540 cows in 54 shelters in six States — Gujarat, Maharashtra, Rajasthan, Punjab, Haryana and Himachal Pradesh — were used for the study that was conducted from December 2016 to July 2017. Only cows that have been the shelter for at least six months were chosen for the study. The shelters were managed by the government, temple, public or a philanthropic trust.