For centuries, humans have been consuming dairy milk, but non-dairy alternatives are on the rise. Both cow milk and plant-based milk have their pros and cons, but which type of milk is best for you to drink? And which is more sustainable for our planet?

“The first civilized societies in Mesopotamia had cow milk in their food basket around 9000-7000 B.C. […] Camel, goat, yak, horse, and buffalo have been the source of milk,” UNF associate professor of nutrition and dietetics Dr. Alireza Jahan-Mihan explained.

Dr. Jahan-Mihan also says that cultural and geographical factors, as well as people’s beliefs, have determined what kind of milk they consume. Buffalo milk has more fat and protein compared to cow milk, and camel milk—widely used in the Middle East and North Africa—is one of the closests to the composition of human milk, therefore more digestible than cow milk. In Russia and Central Asia, horse milk is popular because some believe its properties can cure ailments, such as tuberculosis and chronic hepatitis.

There are lots of different kinds of milk out there, but cow milk is typically used in the U.S., which ranked third in the 2019 worldwide consumption of fluid cow milk with over 21 million metric tons—India ranked first with 77.7 million metric tons.

“Cow milk is a nutrient-rich beverage that contains an assortment of various nutrients which are important for health and development,” Dr. Jahan-Mihan said. “It contains approximately 3.4% protein, 3.6% fat, and 4.6% lactose, a type of sugar found in milk.”

Eight ounces of milk with 2% fat would provide 130 calories, five grams of fat, 12 grams of carbohydrates and eight grams of high quality proteins. Cow milk is also a good source of minerals and vitamins including calcium, potassium, magnesium, zinc, vitamin D, vitamin A, B12 and thiamine (B1).

The professor also mentioned that milk fat is mainly saturated fatty acids, and if consumed too much, they may increase the risk of cardio-vascular diseases.

Casein and whey protein, two major proteins found in cow milk, are highly categorized and provide essential amino acids for protein and muscle synthesis in the body. These two proteins together improve body composition by increasing muscle mass and reducing fat mass, according to Dr. Jahan-Mihan.

Cow milk nutrients also play a major role in bone health. The professor explained that bioavailability of calcium in cow milk is extremely high and it is due to vitamin D content of the milk plus lactose that facilitates calcium absorption.

Though, despite cow milk’s abundance of benefits, many may not be able to enjoy them at all. According to MedlinePlus, 65% of the human population reduces its ability to digest lactose after infancy.

“Many people cannot tolerate cow milk because they cannot digest lactose,” Dr. Jahan-Mihan said. “Lactose intolerance is primarily due to the lack of lactase, an enzyme that facilitates the digestion of lactose.”

Borden, a popular milk company, said to The Guardian that, “2,730 U.S. dairy farms have gone out of business in the last 18 months alone.”

The Guardian also reported that Americans consumed around 24 gallons a year in 1996, which dropped to 17 gallons in 2018, according to government data.

What could be causing this decrease in cow milk use? Have the past few generations been drinking less milk? Non-dairy alternatives such as almond, soy, and oat milk may play a part in fluid dairy’s demise.

“These products are particularly beneficial to those who cannot consume cow milk due to lactose intolerance or allergic reactions, or for people who don’t want to consume dairy products for various reasons,” Dr. Jahan-Mihan notes.

Forbes reports that the global dairy alternative market was estimated at a value of $11.9 billion as of 2017, and plant-based dairy alternatives are showing 6% better returns than typical dairy products. 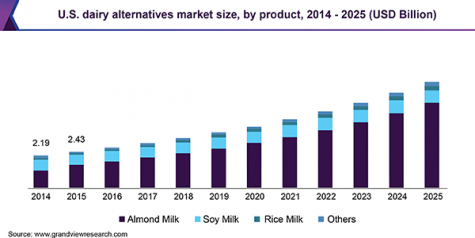 When popular oat milk brand Oatly launched in the U.S. in 2016, the company had to increase production by a whopping 1250%, and still struggled to meet the demand.

Plant-based milks can be derived from oats, cashews, hazelnuts, rice, coconuts, flaxseed, and many more plants.

Almond milk is high in vitamin E, a vitamin found to benefit brain health, and gives about 37% of the daily need in just one ounce. One cup of almond milk can give you 20-50% of the needed vitamin E intake, whereas cow milk doesn’t contain the vitamin at all.

Manufacturers often enrich the almond milk with calcium and vitamin D  to make up for its natural lack. You can check the calcium/ vitamin D component and type on the product’s nutrition label.

Almond and oat milk have less protein than dairy milk, but oat milk has lots of beta-glucans, a healthy type of fiber. Soy milk has as much protein as cow’s milk and also provides potassium. Oat milk also has lots of carbohydrates compared to other plant milks—sometimes as much as dairy—and can contain half of the daily suggested amount of B12.

Another benefit of plant-based milk is that some are easy to make at home yourself. Meanwhile, not many people have their own cow, and there’s rarely a milk man these days.

An important factor to consider is which type of milk is better for the earth, using the least amount of resources and producing the least pollution.

It takes about four square kilometers/1.5 miles to make only one glass of cow milk, according to Ted-ed. The land use for its production can steer deforestation and habitat destruction.

It takes less land to grow oats and soybeans for milk, than it does to feed a cow—a quarter square kilometers/0.09 square miles per glass, the video report said. Soybean farms drive major deforestation, whereas almond and oat farms don’t (although one of their investors was alleged linked to deforestation in the Amazon).

0.1-0.2 kilograms of greenhouse gases are produced per glass when making plant-based milks. Dairy cows, however,  produce over half a kilogram of gas emissions per glass of milk, largely from burping and farting out methane.

Depending on your nutritional needs or restrictions, it can vary what kind milk is best for you. But if you want to put the planet first, practice veganism, or have ethical dairy farming concerns, soy or oat milk is the best way to go. If you want to build muscle, or need stronger bones, cow milk may suffice—with a larger expense to the environment.

If you have no limiting dietary restrictions, choosing can be difficult, but for many people the decision mostly relies on what the milk tastes like. So don’t knock any milks until you try them yourself.

For more information or news tips, or if you see an error in this story or have any compliments or concerns, contact [email protected].