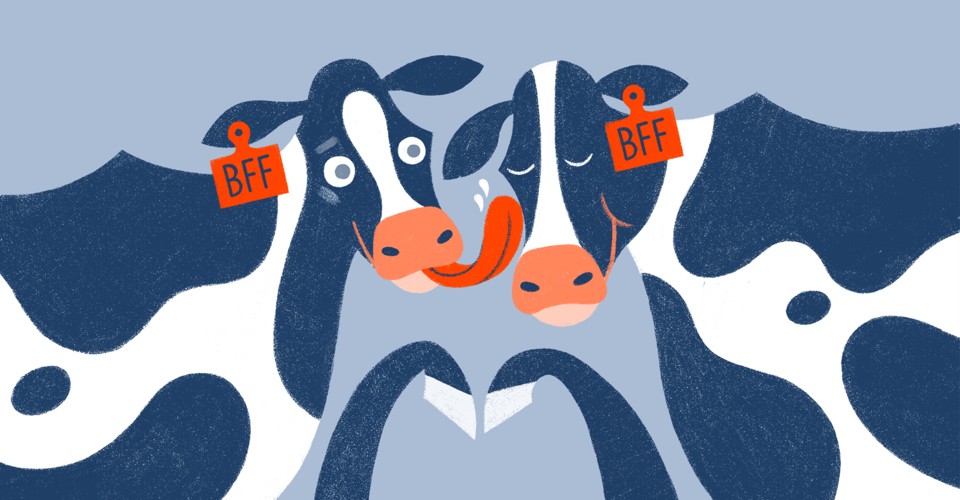 A cow is a beast bred for uniformity. Whether black-and-white Holsteins or ginger-colored Jerseys, the marvel of the herd is that such unvaried selfsameness has been coaxed, over time, out of bovine diversity. Identical cows lift up identical, dozy eyes. Jaws slide, muffled by fodder, chewing cud. A handful of breeds dominates the beef, dairy, and leather industries the world over. Cattle are “a human product like rayon,” Annie Dillard once wrote, encountering steers in Virginia. “They’re like a field of shoes.” People manufacture them. In the past 40 years alone, agricultural scientists seeking to increase milk production have altered at least 23 percent of the Holstein’s genome.

Those of us who readily mistake one cow for another may be surprised to learn that these animals not only recognize one another as individuals, but have friends they prefer. Indeed, it turns out that cows are especially interested in—and affectionate toward—particular other cows. A kind of sisterhood is thought to feature in their social lives.

What is friendship, in the case of a cow? For decades, behavioral studies of livestock have tended to focus on aggression, because fighting between animals can result in physical injuries and economic loss. Bovine companionship, a less conspicuous dynamic, long went underrecorded—at least as a subject of scientific inquiry. As herd sizes have increased and greater numbers of cows have been subjected to intensive stall-feeding, the incentives to understand cow stress, and cow resilience, have grown.

Cow friendship, researchers now believe, is expressed foremost in grazing and licking. A study of a commercial herd in the United Kingdom found that, put to pasture, more than half of the animals spent time eating and resting alongside a specific individual. Separated from the larger group, cows that were paired with their favored friend maintained lower heart rates and did not stamp, toss their heads, pace, or sway as much as cows paired with individuals they’d shown no partiality toward. In short, they seemed less agitated. A different study suggested that cows were able to recognize others they knew in real life from photographs, which they then ran toward. As for licking, cows seem to lick the heads, necks, and backs of other cows for a reason similar to why chimpanzees groom each other—to bond. One set of findings, published a few years ago, showed that among Austrian Simmental cows, licking reduced bovine heart rates—though only for the receivers of licks. In Kenya, Zebu cattle lick discerningly, but without reciprocity. A long-term observational study of a herd of 31 Zebu on the Athi Plains found that most of these animals preferred to seek a familiar friend to lick, and that in a given friendship, one cow was almost always the licker, and the other cow, the lickee. However, this hierarchy did not align with the social structure of the herd: The dominant Zebu were not the most popular Zebu to lick. Nor could the researchers identify what made a Zebu likely to be licked. Still, the cows appeared to maintain consistent allies for several years.

You might assume the affectionate attachments of cows to be a side effect of domestication, but there is evidence that wild bovines, too, form platonic partnerships. Older male buffalo, for example, sometimes establish dyads with other bulls. Among these and other hoofed, herbivorous animals that congregate in very large numbers, perhaps friendship proved adaptive across generations because individuals that remained clustered— and vigilant to predators—were more likely than others to survive.

Read: The secret logic of cows

Whether or not bovine friendship is an evolutionary legacy, the American commercial milking cow’s life affords little opportunity for other social contact. The majority of cows in the United States are artificially inseminated so as to bear the calves that bring on milk production (a single Holstein bull, born in 1974, was the progenitor of more than 80,000 young). And in most instances, calves are removed from their mothers soon after birth. Interactions with mates and offspring being impossible, might female friendship fill the void?

Sadly, few cows get the chance to find out. They tend to forget their friends quickly: After just two weeks apart, individuals who once preferred each other no longer display friendship’s behaviors or positive effects. This is significant, because large-scale dairy farms may regroup a herd four to 12 times a year. Considering that cows without friends show evidence of distress, thwarting cow friendship would seem to contribute to cow suffering.

Surprisingly, the camaraderie between cows and people also appears to affect bovine productivity, and perhaps contentment. A 2009 survey of more than 500 British dairy farmers revealed that cows that had been given names produced 258 more liters of milk than did cows that went unnamed and thus unrecognized as individuals.

This article appears in the November 2019 print edition with the headline “Bovine Friends Forever.”

We want to hear what you think about this article. Submit a letter to the editor or write to letters@theatlantic.com.

Rebecca Giggs is a writer from Perth, Australia. Her work has appeared in Granta and The New York Times Magazine.