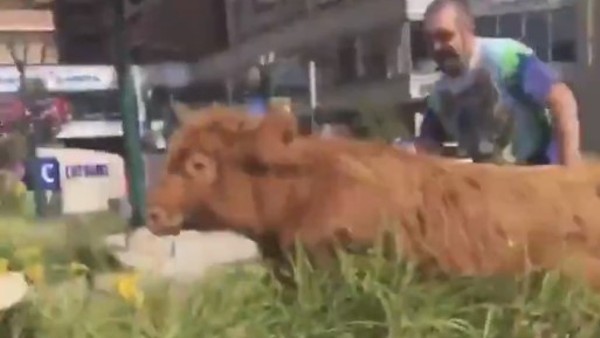 saint louis, y’all so country and ghetto. i love it 😂 pic.twitter.com/WhVCZQgXpH

In a video uploaded by Twitter user @TreHitz on Sunday morning, a ginger cow was filmed running wild in the streets of St. Louis.

The out-of-place little buddy was shown weaving along a grassy median on South Kingshighway Boulevard near Children’s Place outside Barnes and St. Louis Children’s Hospital.

The shaggy-haired cow was darting around like she didn’t know what to do and didn’t know where to find safety. Yes, this cow is all of us during month four of the pandemic lockdown.

Clearly unsure of the next move, the fluffy ginger seemed determined to find a way to run free. Judging by her little tongue sticking out, she was thirsty, too. (We’re just assuming she was a girl because she’s so pretty.)

It looked like she was slowing down a bit right when a man showed up to lasso her. But when she saw what he was up to, she bolted.

Clever girl. If you saw a dude in a tie-dyed shirt coming at you and trying to put a rope around your neck, you’d hoof it in the opposite direction, too.

We contacted St. Louis police for information about the incident and they said this:

“Officers responded to an “Animal at Large” call after a cow fell out of a trailer. The cow was returned to its trailer a short time later. No report was taken.”

Damn. She didn’t get to run free or get rescued like her bovine brothers who escaped the slaughterhouse and partied on St. Louis streets a couple of years back.

But even if the story ends with her capture, the short video clip is still worth a watch for the hilarious commentary.

We’ll never hear “What the hell is that shit, bruh?” the same way again.

And according to some, a ginger cow is “key to the coming of the end of days.” Figures.

Email the author at jaime.lees@riverfronttimes.com