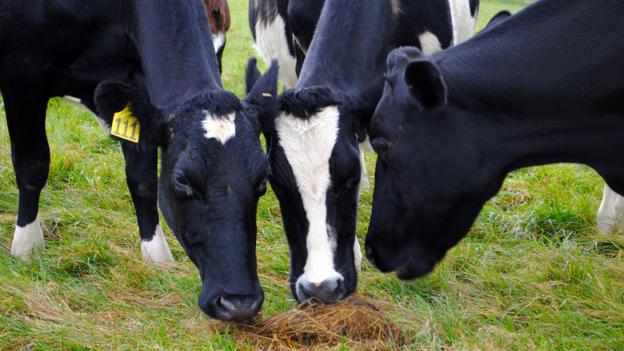 The cows grazing peacefully in the vicinity of New Zealand’s farming science research institute AgResearch look much like any other. They plod slowly around the pastures, heads bowed as they tear up mouthfuls of grass and let out soft, low moos.

But some of these animals are not like the cattle you might find on other farms. Away from view, inside the hard-working stomachs of these cows, an experiment that could potentially change the planet is taking place.

They have been given a vaccine against certain gut microbes that are responsible for producing methane as the animals digest their food. Methane is one of the most egregious of greenhouse gases, roughly 25 times more potent at trapping heat than carbon dioxide.

• What if the world went meat free?
• The poisons released by melting Arctic ice
• Why we aren’t acting fast enough on climate change

AgResearch’s aim is to develop this vaccine, along with other anti-methane methods, in an effort to allow us to continue eating meat and dairy products while lessening the impact the livestock industry has on the environment. Beef without blame, you might say; and cheese with a clear conscience.

Estimates vary, but livestock is reckoned to be responsible for up to 14% of all greenhouse emissions from human activities. Alongside carbon dioxide, farming generates two other gases in large quantities: nitrous oxide from the addition of fertilisers and wastes to the soil, and methane. The latter is largely belched out by ruminants – principally sheep and cattle – and accounts for more than a third of the total emissions from agriculture. The average ruminant produces 250-500 litres of methane a day. Globally, livestock are responsible for burping (and a small amount from farting) the methane equivalent of 3.1 gigatonnes of carbon dioxide into the atmosphere annually.

But the scientists at AgResearch hope it may be possible to reduce the contribution livestock farming is making to global warming.

Their approach builds on work by Sinead Leahy, a microbiologist at AgResearch who is currently on secondment to the New Zealand Agricultural Greenhouse Gas Research Centre. The methane produced by ruminants comes from some 3% of the vast number of microbes that live in the rumen, the first section of the gut. The guilty organisms belong to an ancient group called the archaea, and they are capable of living in environments where there is no oxygen.

Through a process known as enteric fermentation, these microbes decompose and ferment the plant materials eaten by the animals, producing methane as a byproduct. To release the pressure that can build up as this gas is produced, the animals then burp it out.

To weed out the bacteria responsible, however, Leahy and her colleagues had to find a way of reproducing the oxygen-free conditions of the rumen in their laboratory. Using DNA technology, they were then able to sequence the genomes of some of the key species.

“Understanding what makes these microbes different from other types that are also important for ruminant digestion is essential,” says Leahy. “Through our research we were able to look across the different types of gene sequence [in the microbes] and pick out targets [shared] across all varieties of methanogen. These then became the top targets for the development of a vaccine.”

This work allowed the team at AgResearch to systematically design vaccines that targeted several microbe species at the same time.

Livestock are responsible for burping the methane equivalent of 3.1 gigatonnes of carbon dioxide into the atmosphere annually

“There are about 12 or 15 species in the subset of archaea we’ve tried to target,” says Peter Janssen, principal investigator of the methane mitigation programme at AgResearch, who has identified various methane-producing microbes in the rumen of sheep and cows. Given by injection, the vaccine is designed to stimulate the animals’ output of anti-archaea antibodies in their saliva, which is then carried into the rumen as the animals swallow.

So far only a small number of cows and sheep have been given the vaccine in trials by the AgResearch team. But the team has picked up a good level of antibody in the saliva and also in the rumen, and antibodies have been recovered from faeces as well, according to the Pastoral Greenhouse Gas Research Consortium, the major funder of the research since 2006. Having shown that vaccinated animals are actually making the antibody, they’re now trying to demonstrate that this does indeed suppress the formation of methane.

To test this, animals must spend time in a respiratory chamber – a large transparent box, sealed except for a flow of fresh air. Stale air leaving the box is sampled for its methane content.

The researchers are also attempting to make measurements outside the laboratory too to better replicate what goes on in the field. One approach is to use a modified feeding trough into which the animal has to put its head to eat. “While their noses are in the feeding trough a gadget inside it can sample their breath,” says Janssen. Even more cunning is a device that can be strapped on to an animal’s back. “It has a little plastic tube that finishes just above the animal’s nose. As the animal exhales the device sucks up a sample of its breath.”

Neither technique compares for accuracy with the respiration chamber, but both serve to give a good idea of what’s going in large numbers of animals. But definitive proof that vaccination cuts the amount of methane belched out by cows is still lacking.

Janssen and his colleagues do know from previous work using drugs that suppressing the methanogens yields the promised reduction. But Janssen and Leahy are not the first to try making a vaccine against methanogens, the term for any microbe manufacturing methane. Some Australian scientists had a go in the 1990s, but were unsuccessful. The AgResearch team are confident their approach, informed by genetics, will yield better results.

But vaccination isn’t the only idea for cleaning up cows’ breath. Animals vary in their output of methane, and some at least of this variation is attributable to genetic differences. Eileen Wall, head of research at Scotland’s Rural College, explains that this offers scope for selective breeding for animals that produce less methane. She sees this not as something to be done in isolation, but as part of a wider breeding programme to develop healthier and more efficient sheep and cows – both these attributes also reduce the greenhouse gases generated per unit of meat and milk.

“Over the past 20 years we’ve already reduced the environmental footprint of milk and meat production in the UK by 20%,” she says. Breeding for low methane would simply be an add-on to existing programmes. She and her colleagues are experimenting with methods of doing just this.

The more fibre a cow eats, the more methane it produces, but adding legumes and various oils to their diet can be helpful

Not everyone is quite so confident. Breeding animals in this way could be time-consuming and expensive, warns Liam Sinclair, who studies rumen metabolism at Harper Adams University in Shropshire, UK.

Another alternative is to feed animals on a diet less to the liking of the archaea. This can be partially effective, says Phil Garnsworthy, who specialises in dairy cow nutrition at the University of Nottingham, so long as it continues to allow the animals to go on producing milk and meat.

“You can probably reduce methane by about 20-25% by altering diet,” he says. One study by researchers at the University of California, Davis, estimated it might be possible to reduce global methane emissions from cows by 15% by changing their diet. But Garnsworthy believes more may be possible. In the UK, he says, farmers mainly use grass-based silage.

“If you changed just to maize-based silage you might see a drop in methane production of 10%.”

The more fibre a cow eats, the more methane it produces, but adding legumes and various oils such as linseed and soya to their diet can be helpful, adds Sinclair.

Adding seaweed to a cow’s diet has also been shown to beat the methane-producing bugs.

One slightly wackier approach to be proposed is to fit cows with burp-collecting backpacks, while students at the Royal College of Art in London have designed a device that could be attached to a cow’s nose ring to convert the exhaled methane into the less potent, but longer-lasting carbon dioxide.

A more realistic alternative, however, are feed additives such as ionophores, which are already used in some parts of the world to boost weight gain in animals and could also be used to inhibit the methane-producing archaea. But these are not without their problems.

Ionophores, which are classed as antibiotics, are banned for use in animals in the European Union due to concerns about how the over-zealous use of these agents in agriculture has helped to fuel drug resistance in bacteria. The ban is controversial because ionophores are not used in human medicine and act in different ways from therapeutic antibiotics.

There are other additives on offer that could also help to inhibit methane in livestock. One that has most recently gathered interest is 3-nitrooxypropanol (3-NOP), which works by lowering the efficiency of the chemical pathway along which archaea convert carbon into methane. The company behind the additive hopes for a 30% reduction.

Another option is to give cattle probiotics, or helpful bacteria, to aid their digestion. Elizabeth Latham, a former researcher at Texas A&M University and co-founder of Bezoar Laboratories, has been developing a probiotic to tackle methane from cattle and claims it can reduce emissions by 50%.

But chemical inhibitors and probiotics like this would have to be added daily to feedstuffs, and would be hard to deliver to animals fed mostly on grass. It is likely to be an expensive option. A vaccine would potentially only need to be given once, or perhaps would need just an annual booster.

Regardless of the approach used, messing with the pattern of microbial life in the gut will alter its ecology – possibly with unforeseen consequences. The gut microbiome is closely linked to health, and changing it can increase the risk of disease. There is even some association in humans between gut bacteria and mood, although it is unclear if reducing methane-producing bacteria would lead to depressed cows and sheep, or what effect this might have on their meat and milk.

Janssen thinks it is unlikely. “We don’t get any signals that we’re going to inhibit the ability of animals to turn grass into meat or milk,” he says.

But until further tests prove that hacking the guts of livestock can cut their emissions without being detrimental to the animals or the products they are farmed for, the world will have to wait with bated breath.

If you liked this story, sign up for the weekly bbc.com features newsletter, called “The Essential List”. A handpicked selection of stories from BBC Future, Culture, Capital, and Travel, delivered to your inbox every Friday.