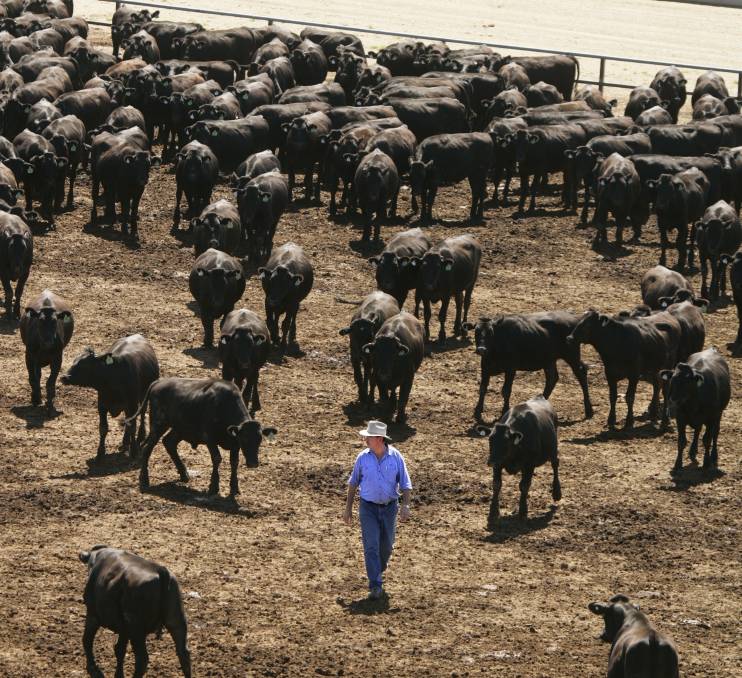 BACK IN THE DAY: Don Mackay walks the Rangers Valley feedlot.

WHEN a young Don Mackay turned up for his first day on the job in the stock and station agency business, his boss told him managing people was the most important skill he’d ever acquire.

And the first thing he had to learn was he’d never please everyone.

Close to 50 years later, with experience in some of agriculture’s most significant leadership positions under this belt, Mr Mackay couldn’t agree more.

“It’s definitely not the sheep and cattle who cause you problems,” he laughs.

Mr Mackay has just stepped down as chair of the Red Meat Advisory Council, having steered the industry through some of its most tumultuous and controversial times: drought, floods, bushfires, attempts to restructure, agriculture ministers coming and going, fake meat, the growth of sustainability and animal welfare demands and, of course, COVID-19.

Accepting that you’ll never win every client, nor will you be able to bring every person on board as you carve out change and leverage progress, has been key to the way he has operated.

Essentially, one must have a thick skin but also a willingness to explain how outcomes were reached and, above all, a desire to press on.

“Leadership is about broadly assessing the situation, talking to a lot of people to understand where sentiment is going, being well read – all these things allow you to put forward the best strategic direction for the industry,” Mr Mackay says.

“It will never satisfy everybody but if can articulate how you’ve got there, you may at least have broad acceptance.”

Fraternising with the enemy

It’s advice that could serve the beef and sheepmeat business well right now around issues concerning the environment and welfare, Mr Mackay agrees.

“Simply saying someone else’s position is wrong or stupid won’t cut the mustard,” he says.

‘Farmers have a view about how to manage the land and believe they are doing it well – and typically they are – but some people have a different perspective.

“We have to understand that perspective. That means talking to people who might be considered the enemy.

“The reality is they represent a view held by a number of people – maybe not the majority – but if you simply ignore them the terrific things the industry has done may not be getting told.”

Mr Mackay said engaging across the political divide, and the public perception divide, would be key to drawing along the big middle ground. That means an industry like red meat then has the support of governments, and the support of society, to keep on the job. Understandably, producers have concerns about the industry as a whole exposing itself to those who seek to put them out of business, Mr Mackay says.

“Our industry has worn the fallout of governments ignoring the facts and the science in favour of popular opinion,” he says.

“But we can’t presume we’ll continue to have the general support of the quiet, moderate majority without continuously engaging.”

That means understanding the extreme positions.

“Live-ex is just one example but one of the classic examples. It’s such an easy target. It’s so easy for someone sipping a coffee in Melbourne to say ‘I don’t support live-ex’.

“That is something we have to deal with.

“We have to perform well first and then educate others that is what we’re doing.”

Having grown up on a central NSW sheep, cattle and farming property, Mr Mackay started as a Elders trainee stock and station agent in 1974, working his way through a series of regional management roles, onto national livestock development manager and finally general manager of Elders NSW.

A move to Queensland to take up the reins as chief executive officer of Australian Agriculture Company in 1999, which was owned at the time by Elders, saw him oversee the company as it was relisted and then run it for close to a decade.

The substantial growth of the company during his tenure as managing director and the introduction of Wagyu genetics were significant highlights.

Managing director at Rangers Valley in northern NSW filled in most of the next decade and Mr Mackay continued in director roles at several rural companies, acting as chairman of four at one stage.

“If you’re a part of an industry, you should put back,” he says simply.

“You can’t sit on the sidelines and complain.”

Mr Mackay has been calling out extension and adoption as a missing link in the chain since he first took up the RMAC job so seeing the big forward strides now being made in this area is satisfying.

However, there is still far more to be done, he says.

“There is a general lack of benchmarking across the production sector so people understand how they perform against their peers and how they can improve,” he says.

“The gap left from the removal of extension services by state governments has not been filled by private consultants in livestock in the way it has in other ag industries.

“Cotton and grains react quickly to R&D. The minute there’s a new crop variety or management technique it’s introduced. Not so in livestock.”

Improving adoption, along with rebuilding the herd and flock to guarantee consistent supply – and keep the processing sector ticking – will be the big challenges over the next year, Mr Mackay believes.

On the opportunity side, growing global demand for a high quality product means Australian beef and sheepmeat has an optimistic future, and the diversity of its markets would serve it well.

The story It’s not the sheep and cattle that cause problems: Don Mackay on his years in agriculture first appeared on Farm Online.