A veteran state lawmaker and cattleman has announced that a company will open a new beef processing plant in January in southwest Missouri’s Pleasant Hope, which is between Springfield and Bolivar. 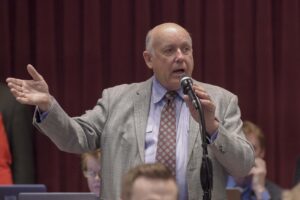 “We have the potential now for Missourians to start feeding and finishing their cattle here in this state, and that will add more value to the Missouri beef,” Love says.

He says the new plant will open at the end of January, providing great pay and benefits. He says the 100,000 square foot facility previously operated as a pork processor, and that the plant is currently undergoing extensive upgrades to accommodate both fed and non-fed beef cattle.

Representative Love, who serves on the Missouri House Agriculture Policy Committee, tells Missourinet that Pleasant Hope is a perfect location for a beef processing plant. The town has about 600 residents.

“If you draw a 60-mile circle from Joplin, which that includes the majority of southwest Missouri, part of southeast Kansas, northeast Oklahoma and northwest Arkansas, you’ve got a lot of cattle,” says Love.

He says the numbers are there, and that the announcement is good news for the entire state.

He and State Reps. Dan Shaul, R-Imperial, and Don Rone, R-Portageville, have been emphasizing Missouri’s efforts to help the meat supply chain overcome interruptions and shutdowns that have happened because of the pandemic.

Love, Shaul and Rone announced in July that the newest modern beef processing plant built in the United States had opened in western Missouri’s Lone Jack, which is southeast of Lee’s Summit. Republic Foods, which has about 175 employees, processes about 250 head of beef cows per day.

As for the Pleasant Hope facility, Love says the plant will have the capacity to process 500 head per day, and will custom process cattle for a variety of niche programs.

“The good news is he’s (the president of Missouri Prime Beef Packers) wanting to open it up and do custom processing for outfits of what I would call labeled meat, that would be in the higher quality grades,” Love says.

He says the top priority for Missouri Prime Beef Packers is food safety. He says the company is emphasizing a connection between the consumer and the producer.

Love says the company is focusing its efforts now on hiring.

Click here to listen to Brian Hauswirth’s interview with State Rep. Warren Love, R-Osceola, which was recorded on December 22, 2020: