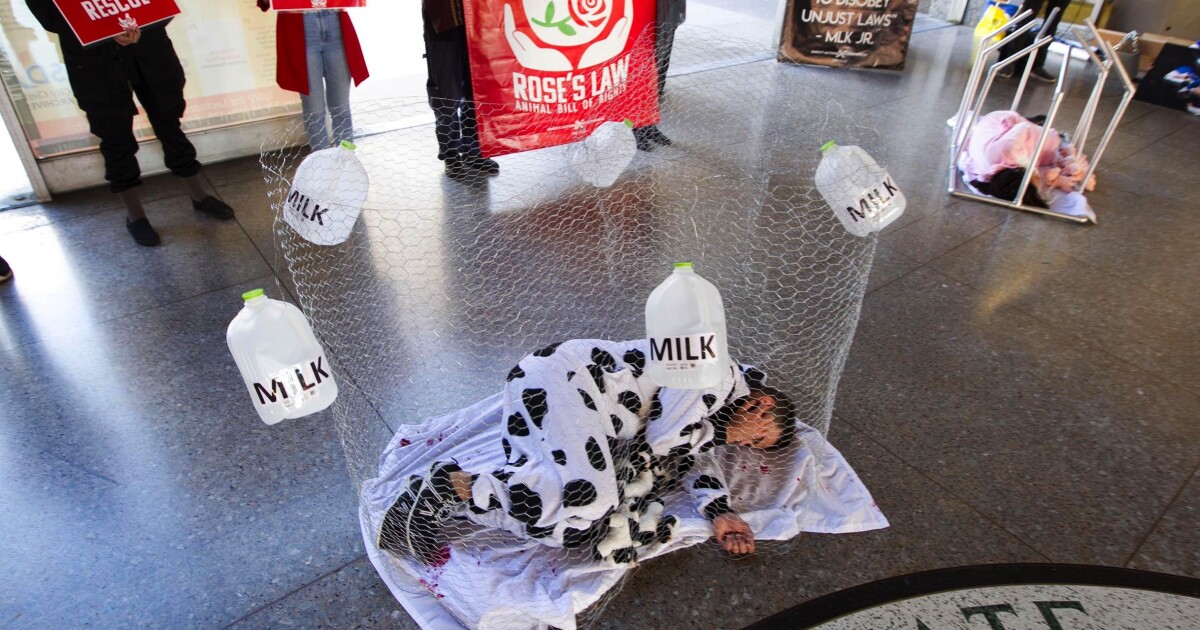 One dramatic moment of Super Tuesday was choreographed by anti-dairy protesters, who rushed the stage while Joe Biden was delivering a victory speech in Los Angeles — and his wife blocked them from reaching her husband.

Last month, protesters interrupted a Bernie Sanders rally in Nevada to demand he “stop propping up the dairy industry.” Three women paraded across the stage topless with the message “Let Dairy Die” written on their chests.

And at this year’s Academy Awards, Joaquin Phoenix chastised the dairy industry for artificially inseminating cows and then “stealing” their babies.

What’s going on here? Are we in the midst of a “Moo Too” movement?

I spent several years observing close-up the operations of a modern dairy farm, and I’m neither an animal-rights activist nor do I condone political violence, but I get the point: The way we exploit and abuse dairy cows as females can be seen as a feminist issue.

The use of the phrase “Moo Too” is not meant to diminish the #MeToo movement, but to emphasize the disturbing fact that exploitation of females is so systemic it even crosses species.

As a city dweller, I knew little about where food came from. That began to change years ago while waiting in line at a McDonald’s to buy my daughter a Happy Meal that came with a coveted Teenie Beanie Baby. Among the collection’s stuffed animals were Snort, a red bull, and Daisy, a black-and-white cow.

How strange, I thought: McDonald’s expects my daughter to play with a toy cow while eating the grilled remains of a real one. And then I wondered: Would it be possible to move backward from “billions and billions served” to just one — one live cow, and to observe the process by which a living animal becomes food?

For the better part of two years, a large, family-owned dairy farm less than an hour’s drive from my home in Rochester, N.Y., allowed me to witness cow life.

I learned that much of a fast-food hamburger is made of meat — not from beef cattle — but from dairy cows sent to slaughter when their milk production has declined.

But I also learned that animal suffering is built into the modern dairy system, and a lot of it has to do with exploiting cows as females. There is nothing inherently wrong in raising cows for milk, but when it’s done on an industrial scale, systemic abuse is built in — nearly 200 supersized U.S. dairy farms have, on average, more than 7,000 cows.

The National Milk Producers Federation declined to provide The Times a statement on dairy-industry protests or practices. But Alan Bjerga, a spokesman for the organization, told Fox Business shortly after the Oscars that if Phoenix “studied the commitment of dairy farmers to animal welfare … he might have a different perception.”

In my experience, dairy cows are routinely caused pain and distress, made ill, and have their lifespans shortened because of how they are treated.

Since a cow gives milk only after a calf is born, she must be made pregnant as often as possible to maximize milk production. On the farm, the artificial inseminator walked through barns selecting cows in heat at the peak of their 21-day fertility cycle. He’d restrain the cow in a standing position, insert into the vagina a 3-foot metal tube known as an “insemination gun” and release a dose of bull semen. Over 25 years, he estimated he had forcibly impregnated nearly 75,000 cows.

In a natural state, the cow-calf bond is strong, with calves being nursed for nearly a year. After one birth on the farm, a mother bent over her calf and vigorously licked it across the eyes, forehead, ears, stomach and back. Licking dries the birth fluids so the calf doesn’t get chilled. Forty minutes after this birth, the farm’s “calf manager” picked up the newborn and drove it to the calf barn. Later, the mother sniffed the straw where her calf had lain and bellowed for much of the day.

After giving birth, a cow naturally lactates for nine months to a year. Cows injected with BST growth hormone — banned in some countries but permitted in the U.S. — can lactate at a higher volume, sometimes for years. But excessive lactation causes wear and tear. In nature, cows can easily live for 20 years, but dairy cows typically are worn out and sold for beef when they are about 5 years old.

Foot damage among dairy cows is so common that the farm had a resting place near the milking machines just for lame animals, so they could walk a shorter distance to be milked. Some lameness can be traced to genetic manipulation aimed at increasing milk yield by producing large, heavy udders that distort a cow’s normal gait. Living on concrete floors and eating too many starchy foods — thought to help increase milk yield — also contribute to lameness.

Mastitis, or infection of the udder, is perhaps the most common ailment among dairy cows. In most cases, it is a byproduct of their wet and crowded living conditions. Serious cases usually respond to antibiotics, but as one vet put it: “The best way to treat a cow with chronic mastitis who doesn’t respond to repeated rounds of antibiotics is high-speed lead.”

It doesn’t matter if you buy regular or organic milk or whether the carton says “grass fed.” Most female dairy cows struggle with these problems. And that’s to say nothing of other painful procedures or what they face later: de-horning, tail-docking, truck rides to a slaughterhouse and then a stun bolt to the head.

If you can find a small, family-run dairy where conditions allow cows to be treated humanely, then wonderful: Enjoy a tall, cool glass of milk. Otherwise we should respect our cows as females and not support their exploitation and unavoidable, systemic abuse.

A glass of almond, soy or oat milk, anyone?

Peter Lovenheim is a journalist and author whose books include “Portrait of a Burger as a Young Calf.”