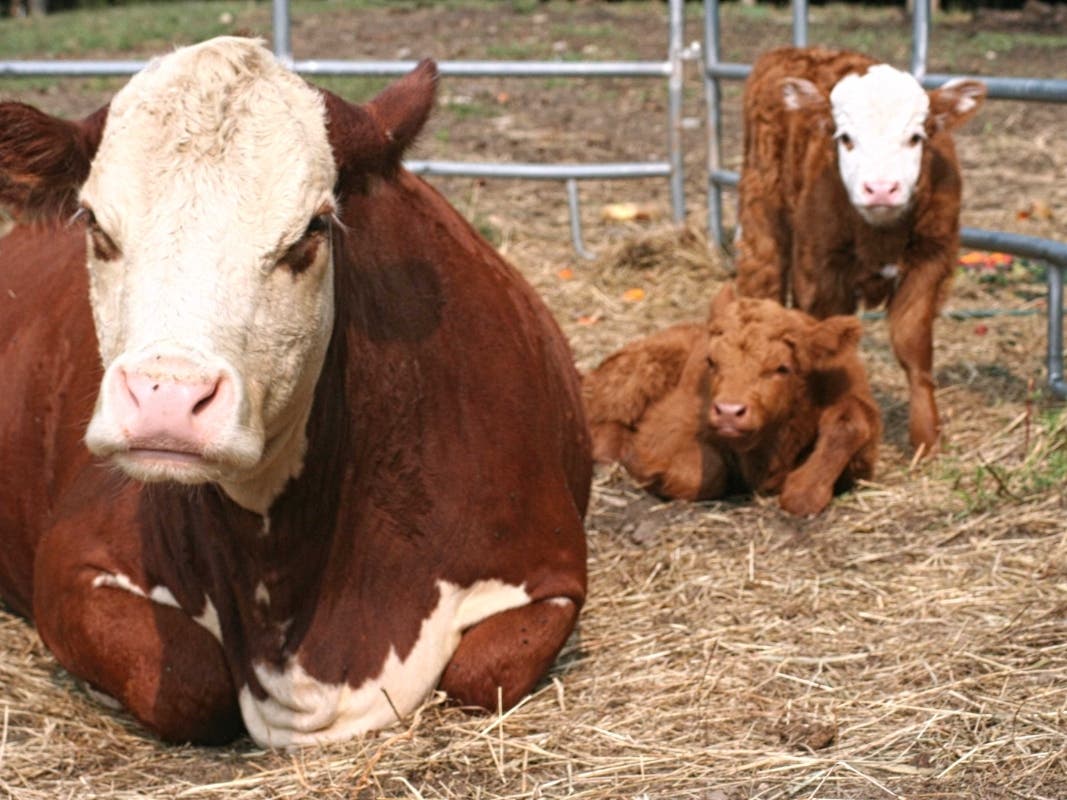 Last week, two more calves were born — late in the year for Miles Smith Farm. We like our calves born in April or May, so how did we end up with September calves? We bought them. In January, we rented out Washington, one of our Scottish Highlander bulls, to Tyler, a farmer who wanted to breed his Hereford cows. Six months later, Tyler sold his pregnant cows to me.

The Herefords are a mother-daughter pair; Keeper, and her daughter Rose. Both were huge, maybe 1,500 pounds, and gentle; Keeper more so than Rose. Keeper lets us scratch her back and lead her with a halter; Rose allows us to touch her, but sometimes runs off if we get too close.

Hamish, The Mooching Calf
As happens with most pregnant cows, about two weeks before giving birth, both cows’ udders swelled with milk. They were pastured with a herd of Scottish Highlanders that included cows with nursing calves. Calves are always hungry and can be opportunists. One calf named Hamis, enticed by Keeper’s massive teats, decided to nurse on Keeper-who let her! Hamish was a moocher, and Keeper was a willing “milk machine.”
This is wrong because a newborn needs the colostrum provided in milk during the first 24 hours of nursing to provide immunity from disease. If Hamish emptied Keeper’s udders, she’d get the colostrum (which she didn’t need), and the calf would miss out when it was born. To keep Hersey from mooching, we separated both Keeper and Rose from the herd.

Moe, The Bull Calf
On Sept. 9, Keeper gave birth to a red bull-calf that looked more like his Highlander dad than his mom. The calf, named Moe, nursed immediately, got his colostrum, and seemed healthy until the next day when Luna, his sister/niece/cousin, was born.
Unlike Moe, Luna (Rose’s calf) has a white face, black rings around her eyes, and a white tail tip. She looks like her Hereford mother, not like her Highlander dad. She was a spunky little girl right from the start. The day she was born, after filling up on milk, she ran and bounced circles around her mom, while Moe watched. This little heifer was a fireball, while Moe was enervated.

This Could Be A Problem
We didn’t notice at first, but after she emptied Rose’s udder, she latched on to Keeper’s teats and a consenting Keeper, let her nurse. It seemed that Keeper liked this little girl better than her calf. Poor Moe lay in the corner of the holding pen, ignored by both moms.

Carole Soule is co-owner of Miles Smith Farm, where she raises and sells pastured pork, lamb, eggs and grassfed beef. She can be reached at cas@milessmithfarm.com.